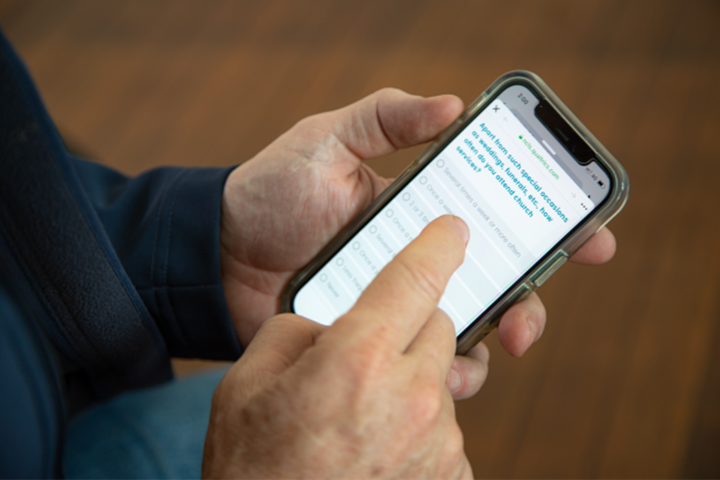 •   Why are my survey questions different from my neighbour?

•   Why this list of countries of birth? And why is Ireland combined with the UK?

•   Why are you asking about all these social issues in a church survey?

•   What are you going to do with all the ‘hot potato’ issues?

•   Why are you asking questions about personal wellbeing and mental health?

•   Why do you have commissioned questions?

•   Why are some question numbers missing in my online survey?

•   Why is the Leader Survey so long?

•   Why is my Leader Survey different to the one that my colleague in another church completed?

•   Who should complete the Leader Survey?

•   Who is the Child Survey for and what is about?

Why are my survey questions different from my neighbour?

Approximately 60% of the content in the Sample Survey forms is taken up with a core component from the Main Attender Survey. The remainder consists of unique questions that progress a whole range of research agendas concerned with the characteristics, attitudes and practices of Australian church attenders. For a list of research areas, see 2021ncls.org.au/research.

Why is there an ‘Other’ option for gender?

In an historic ruling in 2014, the High Court of Australia upheld the right of a transgender person to be registered as neither a man nor a woman with the NSW Registry of Births, Deaths and Marriages. Therefore, the Australian government gives respondents the option to indicate that they identify as “Other”, rather than male or female.
Since 1991, the National Church Life Survey has been “What is your gender?”. The wording of this question has not changed. However, in line with government standards, ‘Other’ has been added as another option.

Why this list of countries of birth? And why is Ireland combined with the UK?

Space constrains the possibilities for the number of countries that we can list on our survey forms. Some individual countries are listed, and some groupings of countries. We have determined the list based on previous results from the NCLS regarding which countries of birth are more common and which are less common. In many of our surveys, Ireland is combined with the UK. However Ireland and Northern Ireland are in a separate category from Great Britain in the Catholic-specific Attender Survey forms.

Why are you asking about all these social issues in a church survey?

There is no easy separation between Christianity and social issues. Faith may provide a framework for morality and ethics. Church is a social setting that interfaces with the broader community. Engagement with social issues is not just a matter for individual Christians; churches as institutions are themselves active in a range of ways on issues such as marriage and the family, poverty, justice, creation care and so on. Moreover, a large majority of Australian church attenders agree that Christians and churches should be involved in public policy issues.

The NCLS is a survey of churches, church attenders and church leaders, and has been tracking attitudes and actions related to a wide range of social issues since 1991. Our church denominations are interested in the relationships between faith, church life and social issues, and it is also in the broader public interest to understand the role of churches in public life today.

What are you going to do with all the ‘hot potato’ issues?

The 2021 NCLS includes questions related to issues such as child sexual abuse, domestic violence, voting preferences, asylum seekers and same-sex marriage. The results on these questions help us to understand views within the churches around contemporary issues of importance for the churches and for public life.

Typically, we publish such results in fact sheets, which are publicly available for use by various interest groups. Sometimes, academics also make use of the data. All publication and release of results and datasets passes a stringent assessment process by the NCLS Research Subcommittee and NCLS Board.

Why are you asking questions about personal wellbeing and mental health?

One of primary research areas for the 2021 NCLS Leader Survey is the resilience and wellbeing of church leaders. People in Christian leadership can experience tremendous levels of personal satisfaction in their work, but they can also experience considerable stress. The NCLS helps us to understand factors that help individuals to thrive and guard against burnout, and to share this understanding with churches.

We also include a smaller number of questions about personal wellbeing and mental health in some Attender Sample Surveys. The relationship between religion and wellbeing is a growing area of interest for researchers from a number of different disciplines. Individual results are always fully confidential.

Why do you have commissioned questions?

We invite these organisations to commission questions because we want to serve the whole church, and also to help cover the costs of the NCLS. NCLS Research is a non-profit organisation. Commissioning clients will be provided with aggregated results reports and, if they request it, de-identified datasets containing the responses.

Why are some question numbers missing in my online survey?

Online surveys enable tailored displays so that respondents only see questions that are relevant to them, based on answers that they give in the survey. For example, if you don’t have any children, you do not need to see survey questions about “your children”. Our survey engine can hide or display questions based on such logic, but it is not able to update question numbers accordingly. So if questions are not displayed, you might notice that some question numbers are missing.

Why is the Leader Survey so long?

The NCLS covers a wide range of research agendas, including: leadership and organisational effectiveness in churches; intersections between church and community, spirituality and wellbeing; tracking who goes to church; as well as trends in attitude, opinion, cultural and generational issues and more. This is a lot of territory to cover in our surveys. Because hundreds of thousands of local church attenders participate in the NCLS, we are able to have a large number of survey variants and still achieve good sample sizes.

In contrast, we have far fewer church leaders (several thousand participate), which means it is not possible to have many survey variants if we are to achieve a satisfactory sample size. As a result, the Leader Survey needs to be much longer than the Attender Survey.

Why is my Leader Survey different to the one that my colleague in another church completed?

The NCLS covers a wide range of research agendas. It is simply not possible to cover all the agendas in only one variant of a survey. In 2021, we have two Leader Survey variants.

Who should complete the Leader Survey?

Who is the Child Survey for and what is about?

The 2021 NCLS Child Survey is for attenders aged 8 to 14 years old.
We are interested in attitudes and experiences regarding spirituality and church life. We are also interested in examining the characteristics of churchgoing parents whose children still attend church. Overall, main priorities are:
•    Child spirituality/spiritual formation/discipleship: What are the religious experiences, beliefs and practices of children connected with churches?
•    Church, faith and family: How do local churches most effectively help families to nurture and pass on faith? What happens in the family/home setting?