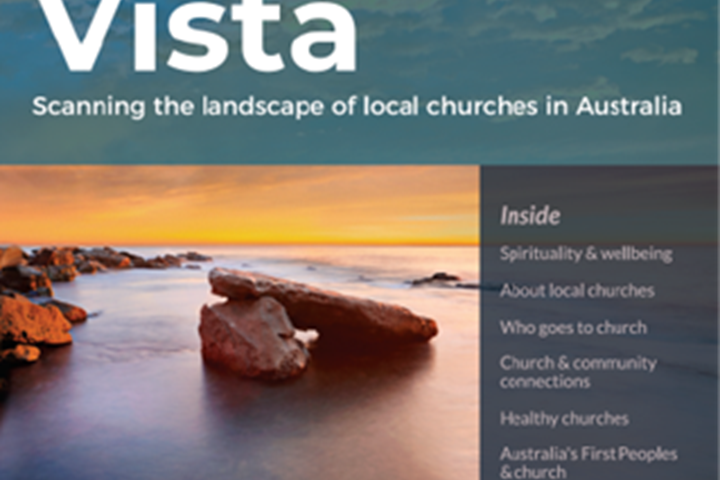 Vista: Scanning the landscape of local churches in Australia

This magazine contains findings from the 2016 National Church Life Survey, as well as data about the Australian population from the 2016 Government Census and the 2016 Australian Community Survey by NCLS Research.

It is one sample of the valuable outputs, findings and resources that this unique research provides to churches, leaders and wider society.

The Vista magazine is an easy to read publication on church life, spirituality and social trends in Australia

It covers a variety of topics including who goes to church, local church health and spirituality of the wider Australian population.

•  Who Goes to Church: There are strong demographic differences between churchgoers and the wider community

•  Church & Community: A majority of church attenders support advocacy from the churches on public policy issues

•  Generations & Church: Around a third of younger generations want to be more involved at church

•  Leadership: Many church attenders are involved in leadership roles at church

The 2016 National Church Life Survey was an extraordinary joint venture across hundreds of thousands of church attenders and leaders. It is the foundation for over 25 years of quality research on a variety if topics. This magazine is a sample of some of the research findings from the 2016 NCLS. Results are based on more then 200,000 adult church attenders aged 15 years and over in around 3,000 churches who completed the 2016 National Church Life Survey.

The 2016 Australian Community Survey was an online survey conducted in early December 2016 by NCLS Research, with a sample drawn from a large online research panel. The survey was distributed by Online Research Unit (ORU). ORU meets ISO 20252 and ISO 26362 standards for both market research and panel work. Results canvassing the views from the wider Australian population about spirituality are based on a sample of 1,258 Australians.